3 Revolutionary Rules for Using Graphics to Enhance Your PR Efforts 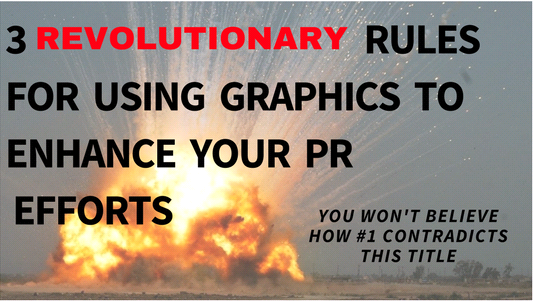 YOU WON’T BELIEVE HOW #1 CONTRADICTS THIS TITLE!

“Content is king” is an adage that every PR professional is familiar with. Between creating content for websites that highlights your value or crafting messages for social media in hopes of driving engagement, there are three things that must be done to reach your target audience: Control what’s being said, how it’s being said and the frequency with which it’s being said.

When creating content, however, we cannot ignore the increasingly significant impact that images have on creating engagement. Graphics, photos and other visuals are important elements and there are a few things to keep in mind when using them:

There are many instances when images are carelessly or thoughtlessly used, simply to drive traffic. There needs to be a balance between intrigue and accuracy. If the image doesn’t complement the value of the content, you have committed two egregious errors: first, you’ve misled the reader, which doesn’t bode well if you’re hoping to build a relationship. Second, you’ve wasted your time, because even if the content itself is valuable, if the graphic doesn’t create a viable bridge to the content, then the tab will quickly be closed and your message will go unseen.

Consider how a visual can strengthen the written content to which it refers. And, vice versa, an image is more compelling when accompanied by well-written content. With PR, our announcements are often delivered via press releases and although this type of dissemination should share news simply and succinctly, including an image can help communicate what is being announced. Launching a new product? Include screenshots of the technology or the interface that the intended end-user will see. Are you announcing a trend or the impact of your services? Take some extra time to build an infographic to accompany the announcement (or replace it altogether). Working on an announcement for which there’s no statistics or product to provide an image? Headshots and images of buildings can be used to promote new hires, promotions, new office locations, partnerships and more. This is especially important when pitching your story to the media – providing a related image along with a good story creates a better impression.

The use of images and video – whether in press releases, on your website or on Twitter, Facebook and LinkedIn – are becoming the norm, so viewers are exposed to hundreds of posts and will skip over one that is void of a visual. As you set out to capture your audience, know that all graphics aren’t created equal. An image that captures your target prospective customer might not be the same image that a reporter wants to see, so consider your audience when determining how to use graphics to boost the visibility of your content.

While adding a visual element to your marketing and PR efforts requires more effort, it’s essential to your organization’s ability to increase its presence. Your press releases, website and social media are the face of your company and your brand and although content is king, commit to using visual elements to be the king of content.