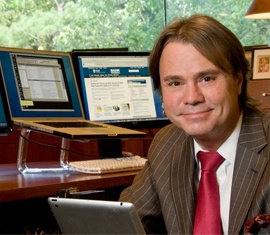 2013 marks my 30th year at the agency as well as my 30th year working with financial technology entrepreneurs and business owners. Over the course of these three decades, I’ve witnessed first hand three eras of sustained growth in the financial industry and the devastating effects of their eventual collapse.

I believe the next five years are going to be some of the most interesting, exciting and prosperous times for innovative financial technology companies.

George Santayana wrote,"Those who cannot remember the past are condemned to repeat it," but the word condemned makes you believe everything was bad. In the past 30 years, there have been three major economic downturns, but all three were preceded by 5 to 7 years of sustained economic growth where my friends in financial technology made many fortunes. Two clients sold their companies for millions of dollars and left our industry to study theology, and one former FinTech president is now a church pastor.

Remember the 1980s? The Reagan Years, yuppies, the movie “Wall Street” or the book Barbarians at the Gate about the RJR Nabisco leveraged buyout? Until the stock market crash of 1987 these were heady times and it was during this era that the regional bank data center gave way to national FinTech companies (like Fiserv) as well as affordable in-house bank technology for any size financial institution (such as Jack Henry & Associates). Banking, real estate and technology all grew until the 1987 stock market crash as well as the giant savings and loan crisis that resulted in more than 1,000 U.S. financial institutions closing their doors.

At the end of the subsequent years of malaise, almost at the same time, Moore’s Law was looking like a reality and computing power expanded at a faster and faster rate. This computing power coupled with the world-wide adoption of an open electronic network we now call “The Internet,” transformed our lives.

The early 1990s was the beginning of the “dot com” days where venture capital firms threw money at kids in college with only an idea (anyone remember Tripp Rackley’s first venture?). With increased investment in solving the Y2K non-crisis, all types of businesses boomed until the one-two punch of the dot com crash and the terrorist attacks of 9/11.

After the crash, countless Americans fled the stock market never to return. The prevailing view, even one held by Jamie Dimon, CEO of JPMorganChase, was that housing (and land) prices would always go up. The unlimited worldwide secondary market was like oxygen on a fire fueling the real estate bubble until it burst with a vengeance. Ben Bernanke, Chairman of the Federal Reserve System, told the FCIC, “I honestly believe that September and October of 2008 was the worst financial crisis in global history, including the Great Depression.”

So, here we are five years later. Why am I so optimistic? It’s because I’ve lived through the booms and busts and I have read the signs.

First, there is tremendous pent-up demand for new financial technology, especially as it relates to payments. Ten years ago we may not have heard of PayPal, but today it’s found in the checkout aisle at your local Home Depot. Second, there are trillions of investment dollars sitting on the sidelines and these money managers are tired of waiting. They will be investing heavily in emerging technologies but more importantly SAAS and cloud-based offerings because of their predictable business models. Third, mobile is the new PC. More and more people, young and old alike, WANT to do business (and banking) on their smartphone or tablet. It’s the “Wild West” all over again except this time consumers are walking around with devices that are smarter than the mainframe computers banks used 30 years ago.

In closing, smart FinTech entrepreneurs will study the past and learn from it. Few public companies currently invest in pure research and development, so in order to grow, the larger players will find and buy truly innovative financial technology start ups for years to come.